Our Israel solidarity rally here in Philadelphia yesterday afternoon, which drew 2,500 people to LOVE Park, was a huge success and a great time.  And a helpful, much needed reminder to people like me who sometimes spend more time than we should in dark, hate-filled corners of the internet, that the antisemites at places like Daily Kos are truly a tiny, though loud and vicious, minority in our society, and that Americans continue to stand with Israel, as she seeks to end the current terror launched on her by a genocidal terrorist organization which hides behind its women and children, stores missiles in schools and uses ambulances to transport its 'brave' fighters. 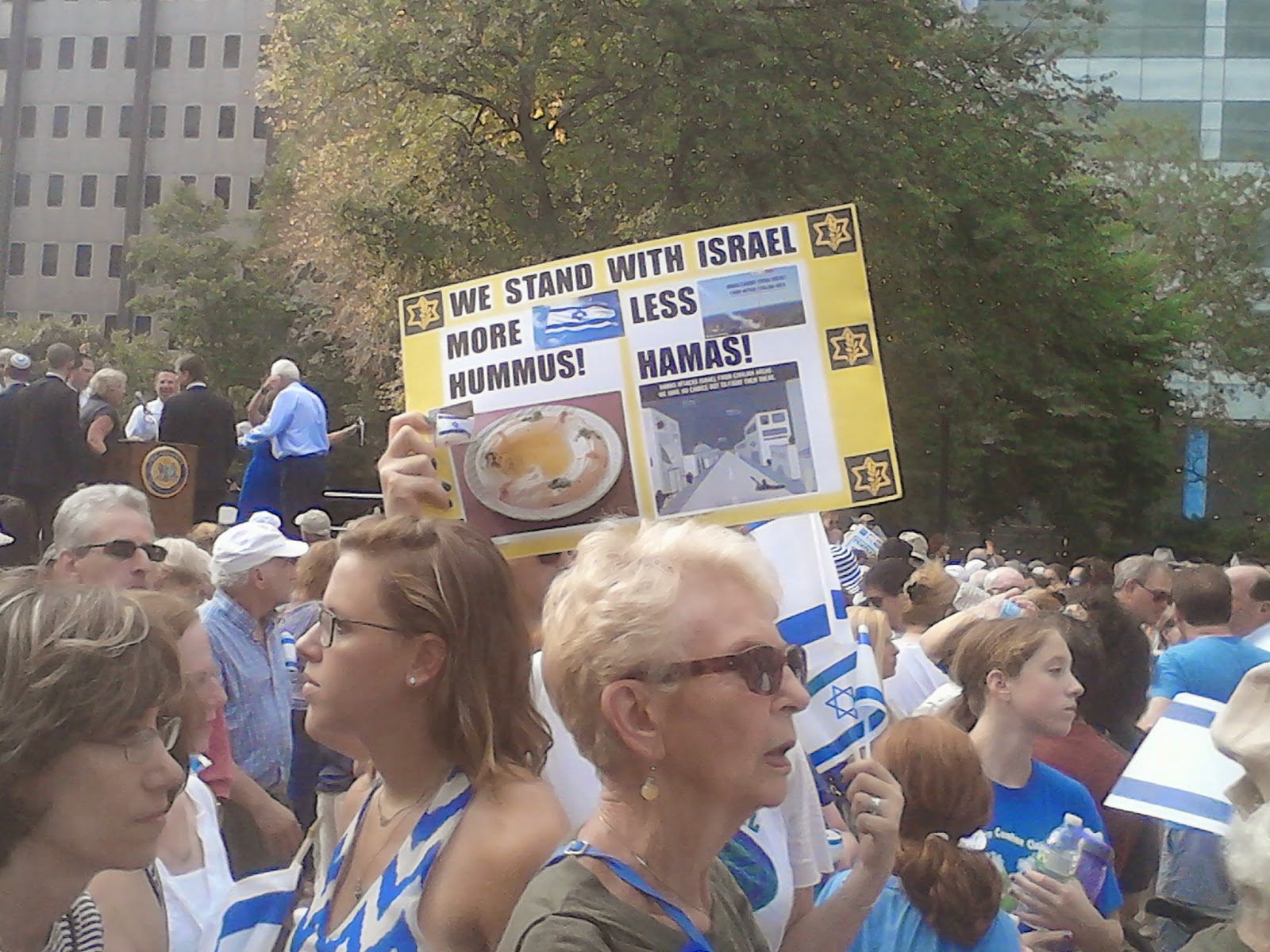 Professional photos of the rally, courtesy of JFGP, can be found here.  Below, I'll post a bunch of my own, decidedly non-professional, cell phone snapshots as I wandered the rally.  I hope you'll enjoy. 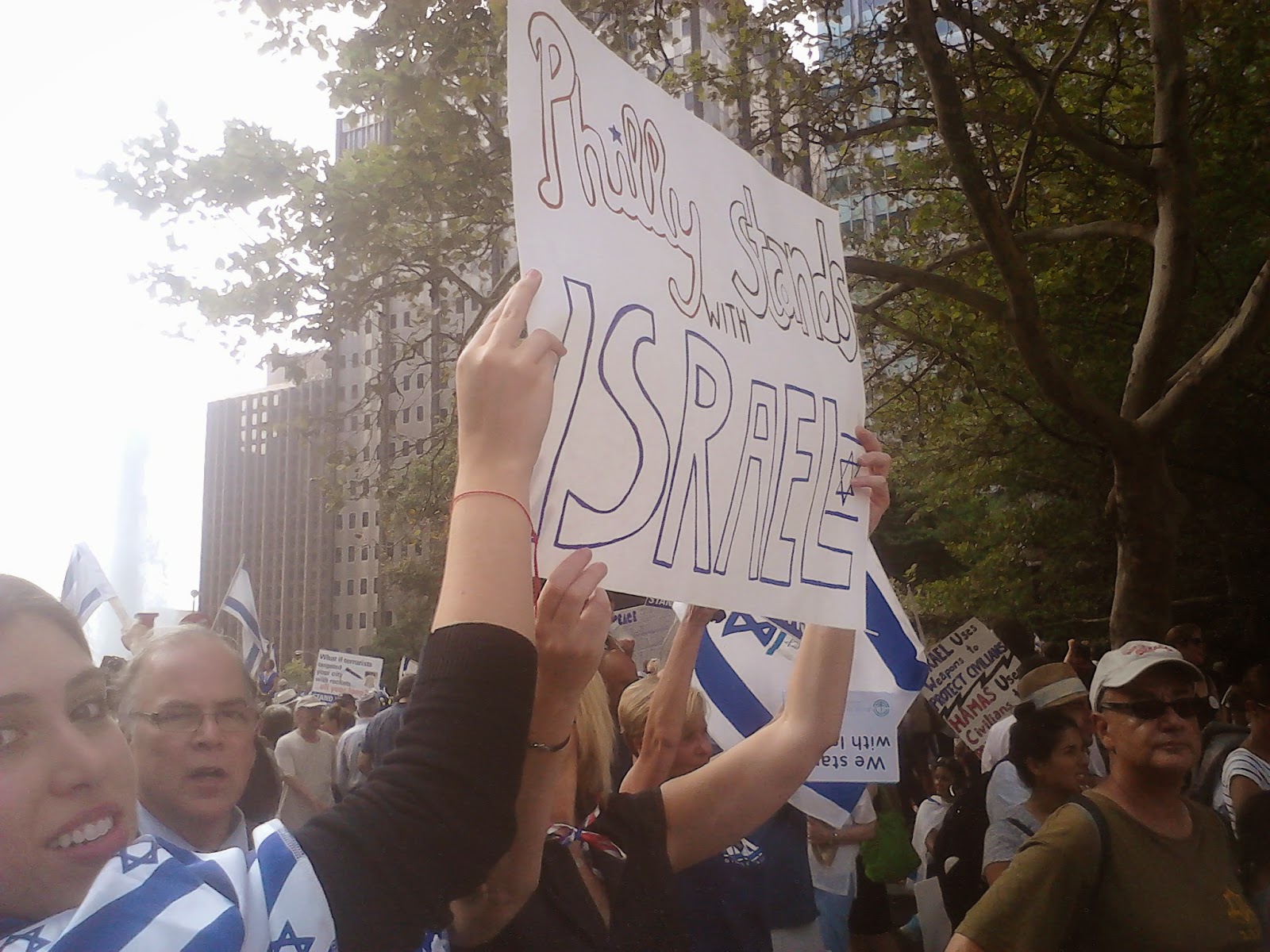 I split my time pretty evenly between the speakers on the stage, walking around amongst the huge and friendly (and funny!) crowd, and standing as part of the half-block-long, police separated line countering the anti-Israel protest going on across 15th Street from us at the same time. 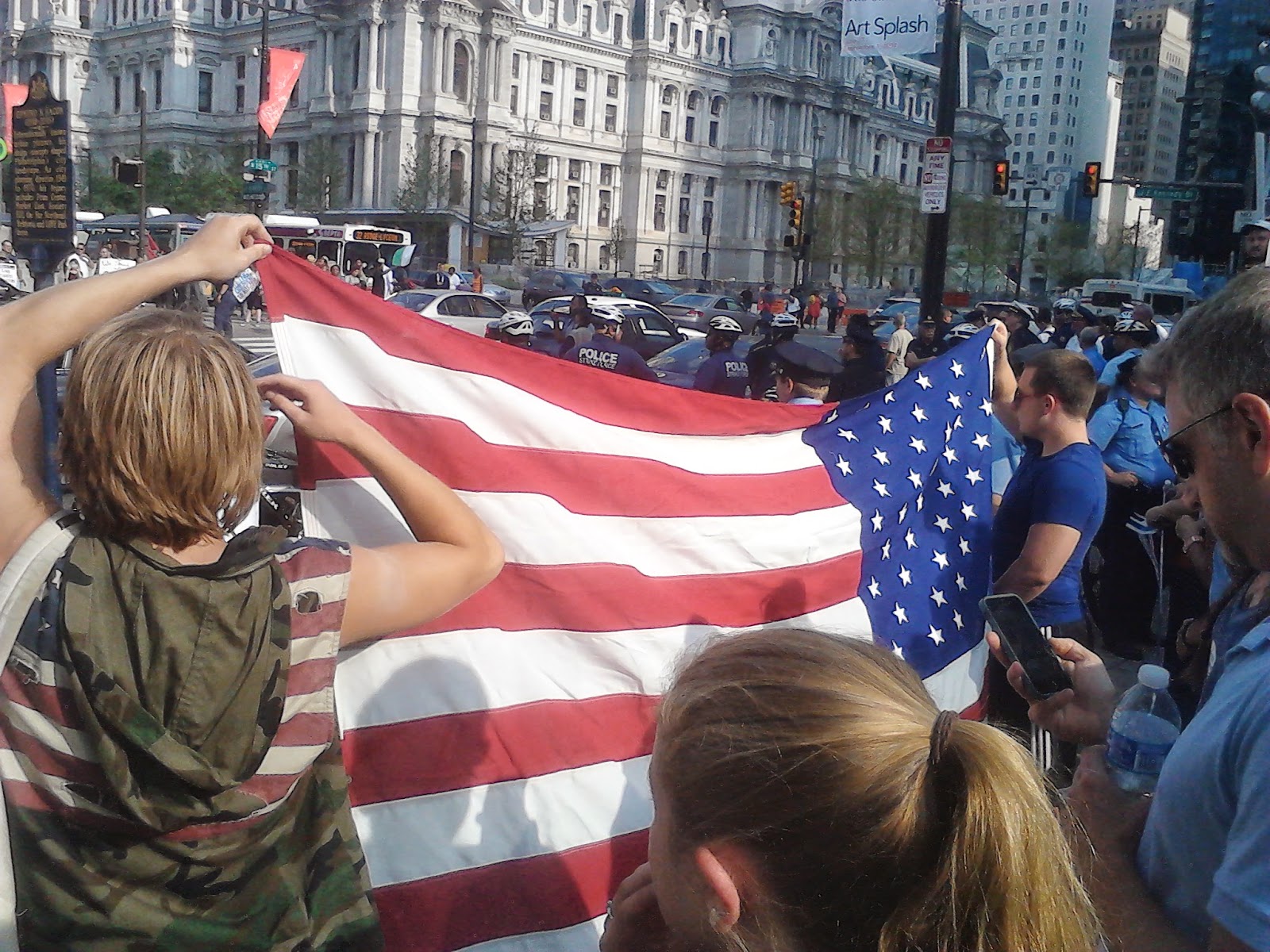 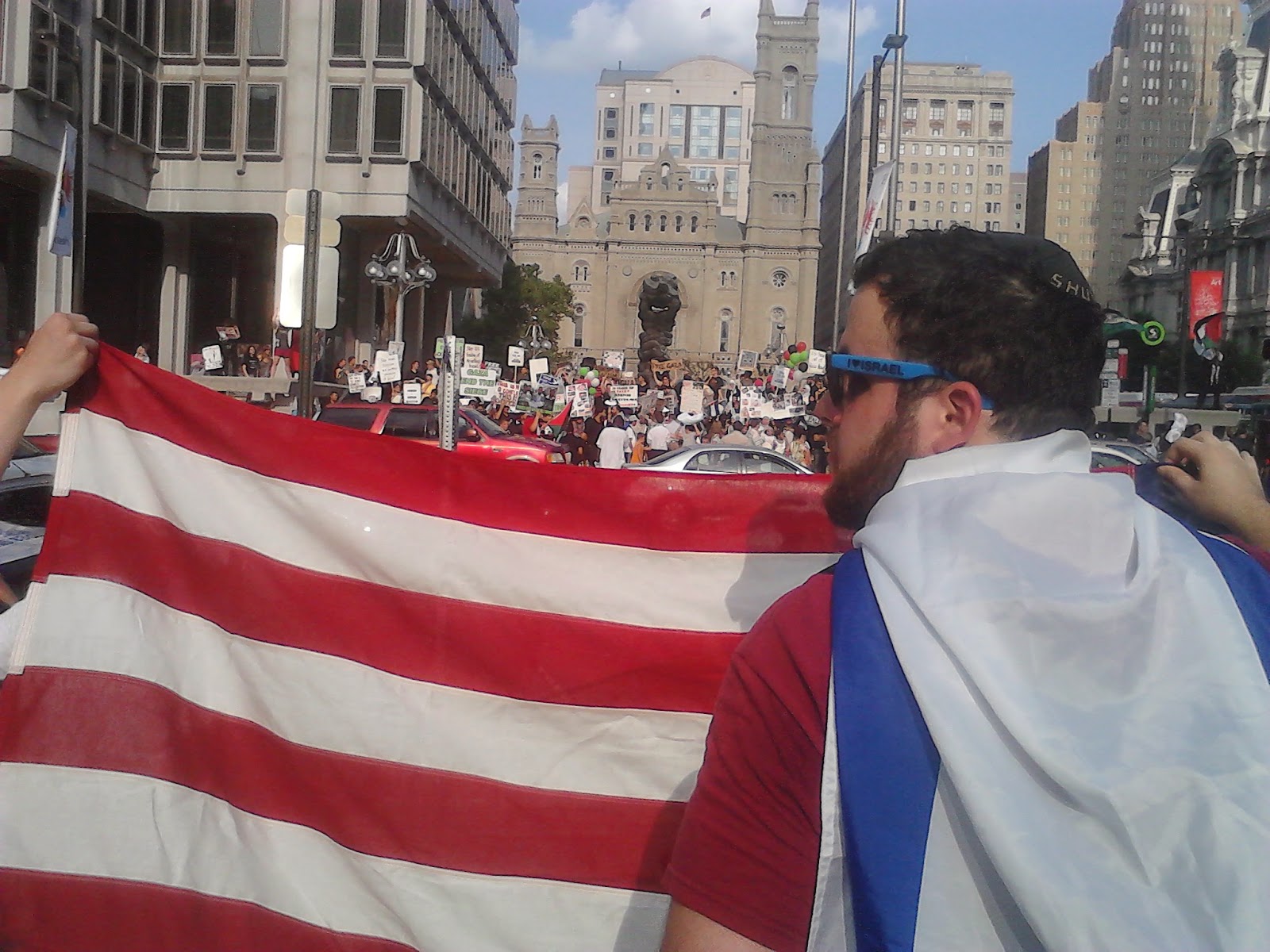 100 - 150 people stood on the other corner, yelling and waving flags (not one American flag amongst them, of course) and hateful signs.  The signs could have been worse, and I've certainly seen much worse from coverage in recent rallies around the internet. 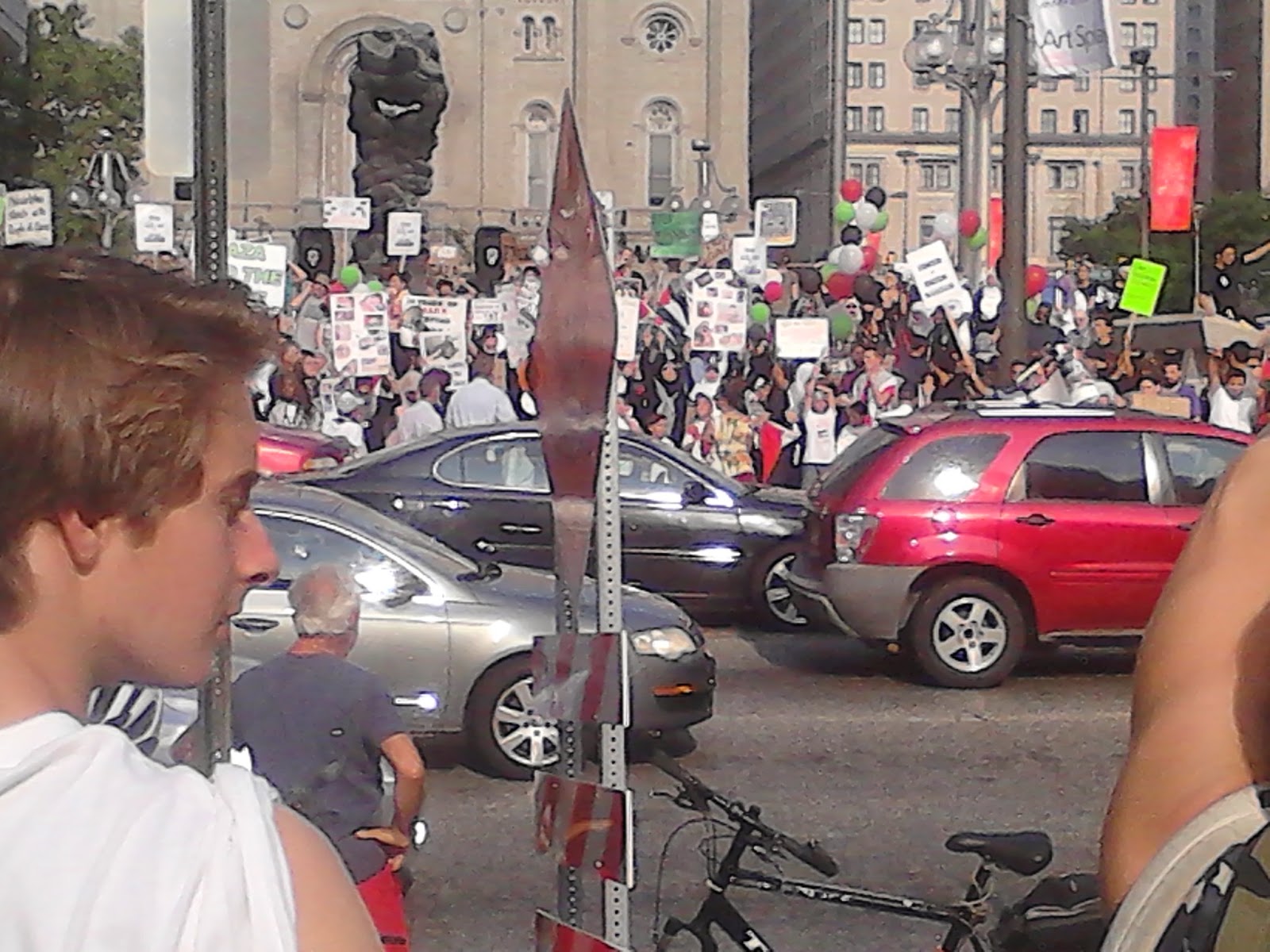 There was one "Israel = swastika" sign (you might be able to make it out there right next to the red truck), which popped up about twenty minutes into the rally, right next to the small contingent of half a dozen or so "Jews for Palestine" across the street.  It appeared to be a young Arab lady who was holding the sign, and one wonders why she went over right next to the small crowd of self-identified Jews on their side to wave that specific sign?  Hmmm. 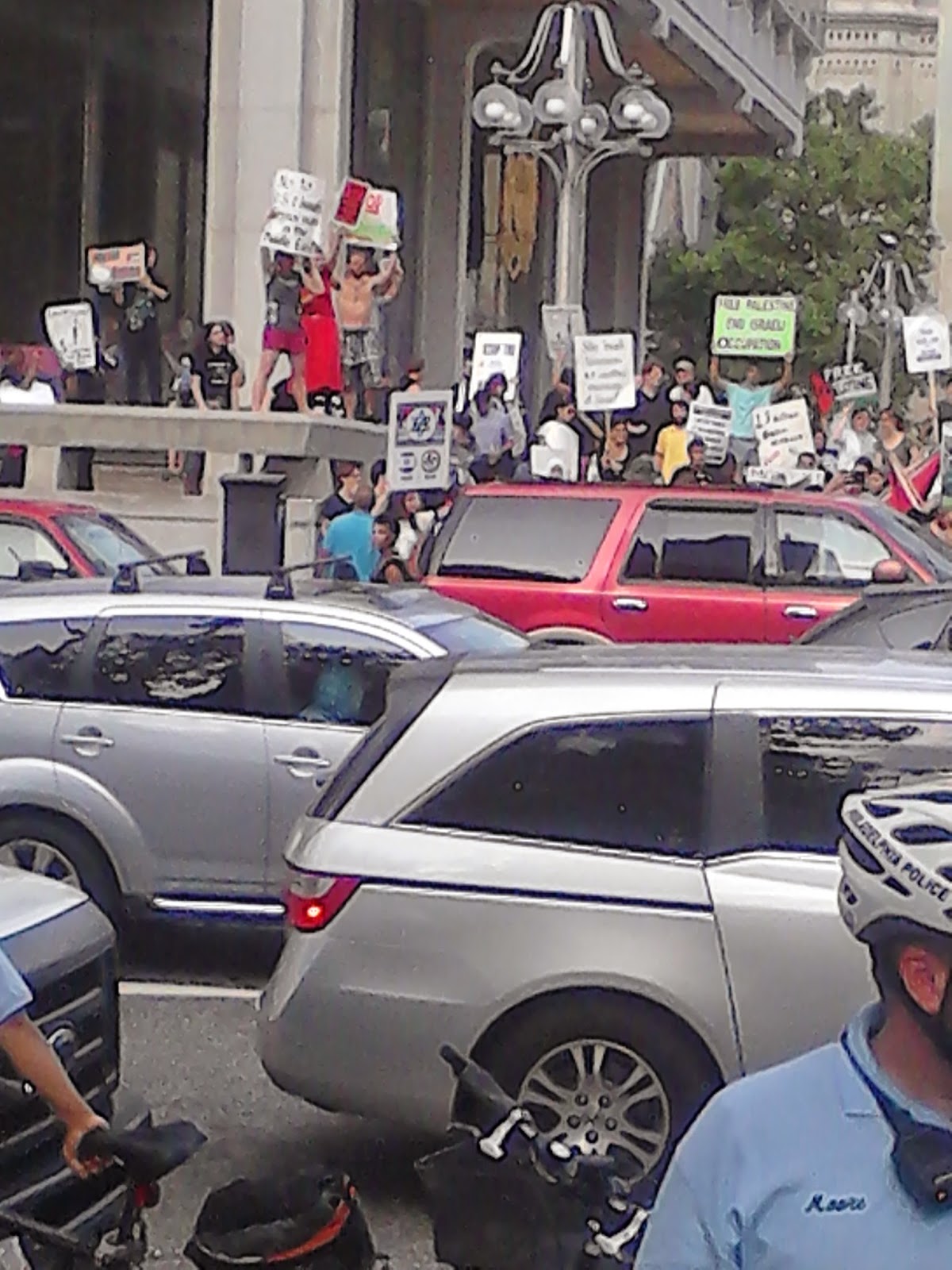 That particular sign went away after about five minutes, as we started up a nonstop chant upon noticing it.  I would like to think that they hid the blatantly antisemitic sign out of shame, but it was probably just a tactical decision once the television news crews began filming for the evening broadcasts at 5:00.  I later noticed that same young lady back in her regular spot on the other side of the protest. 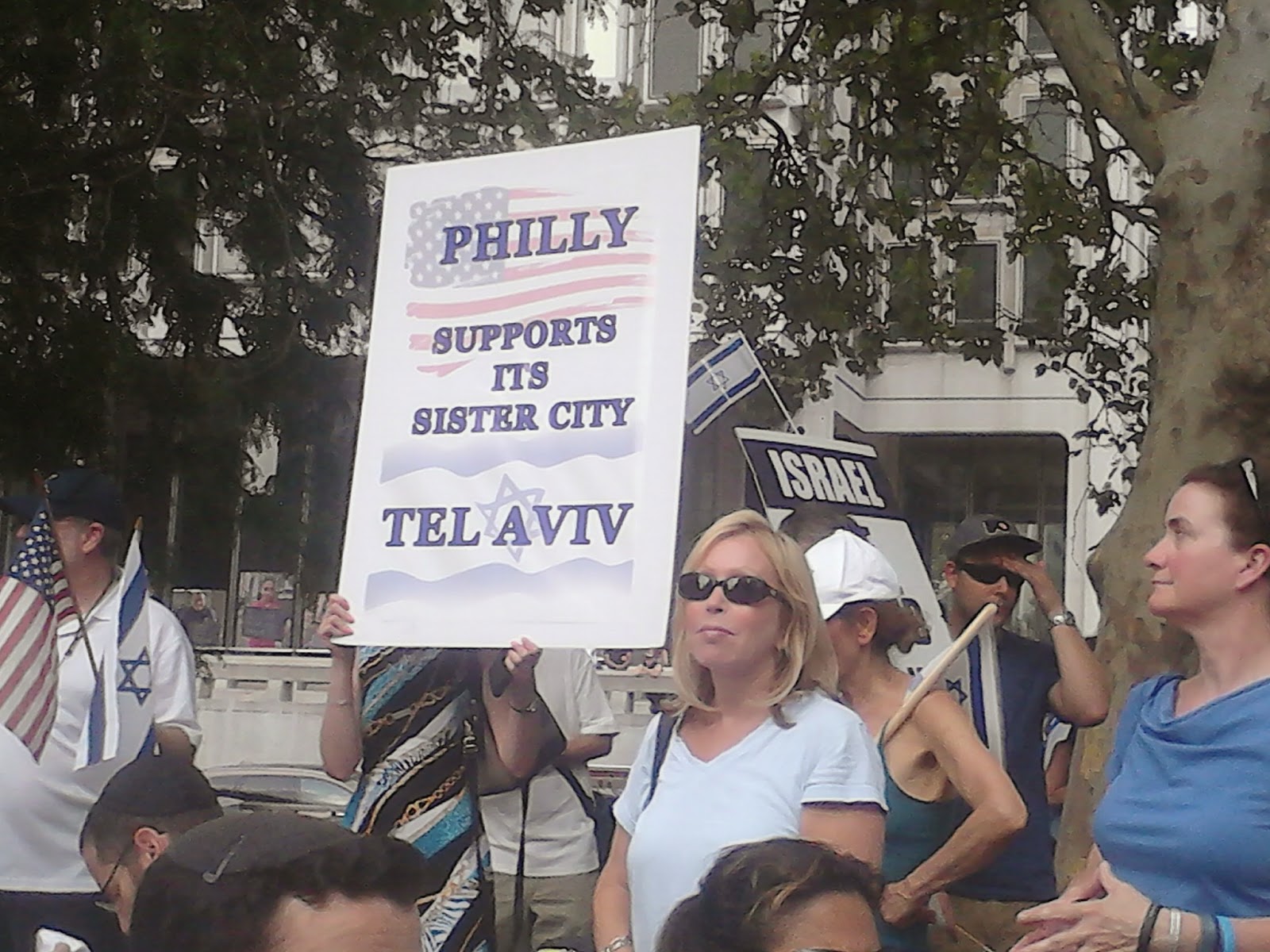 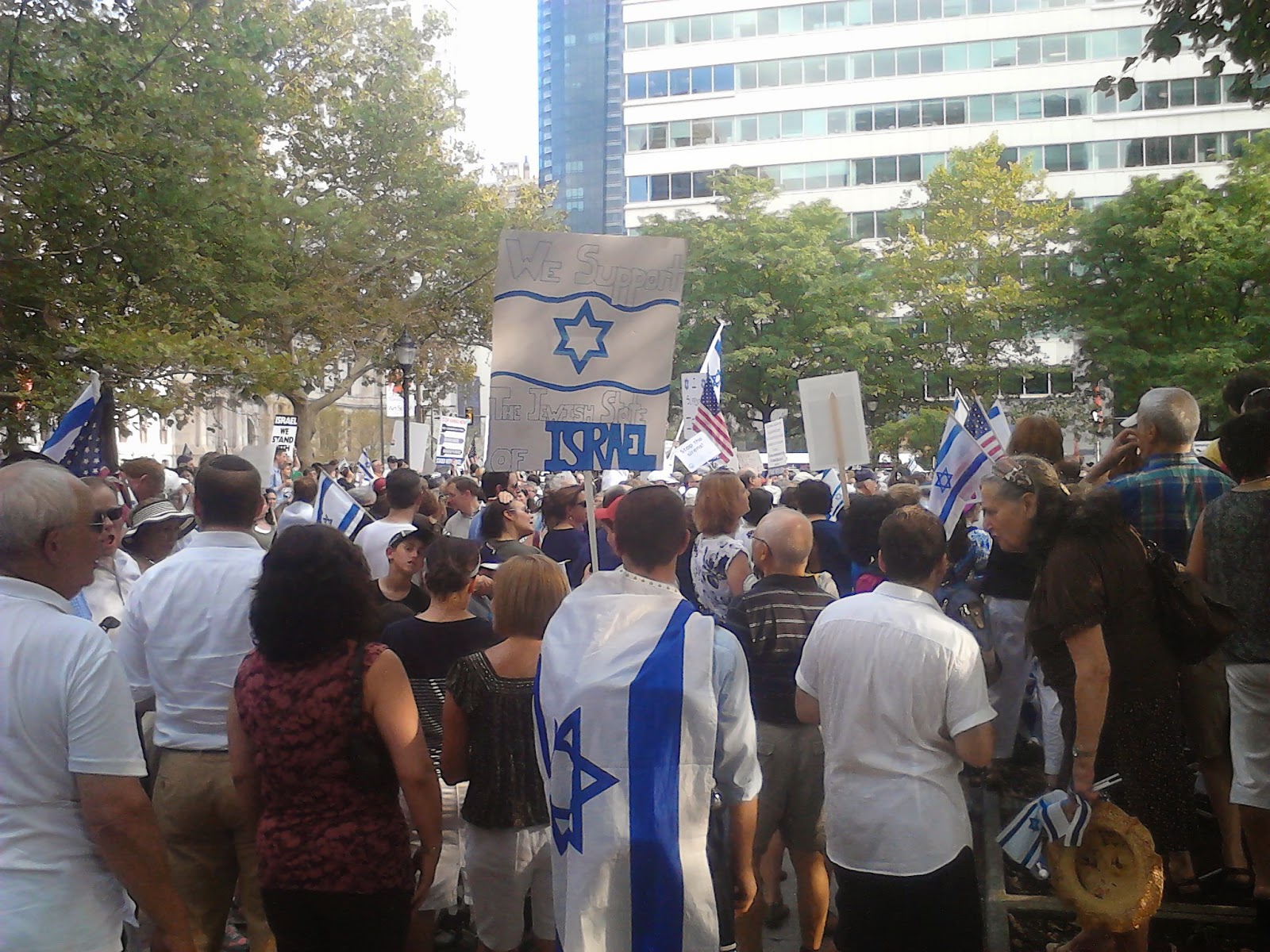 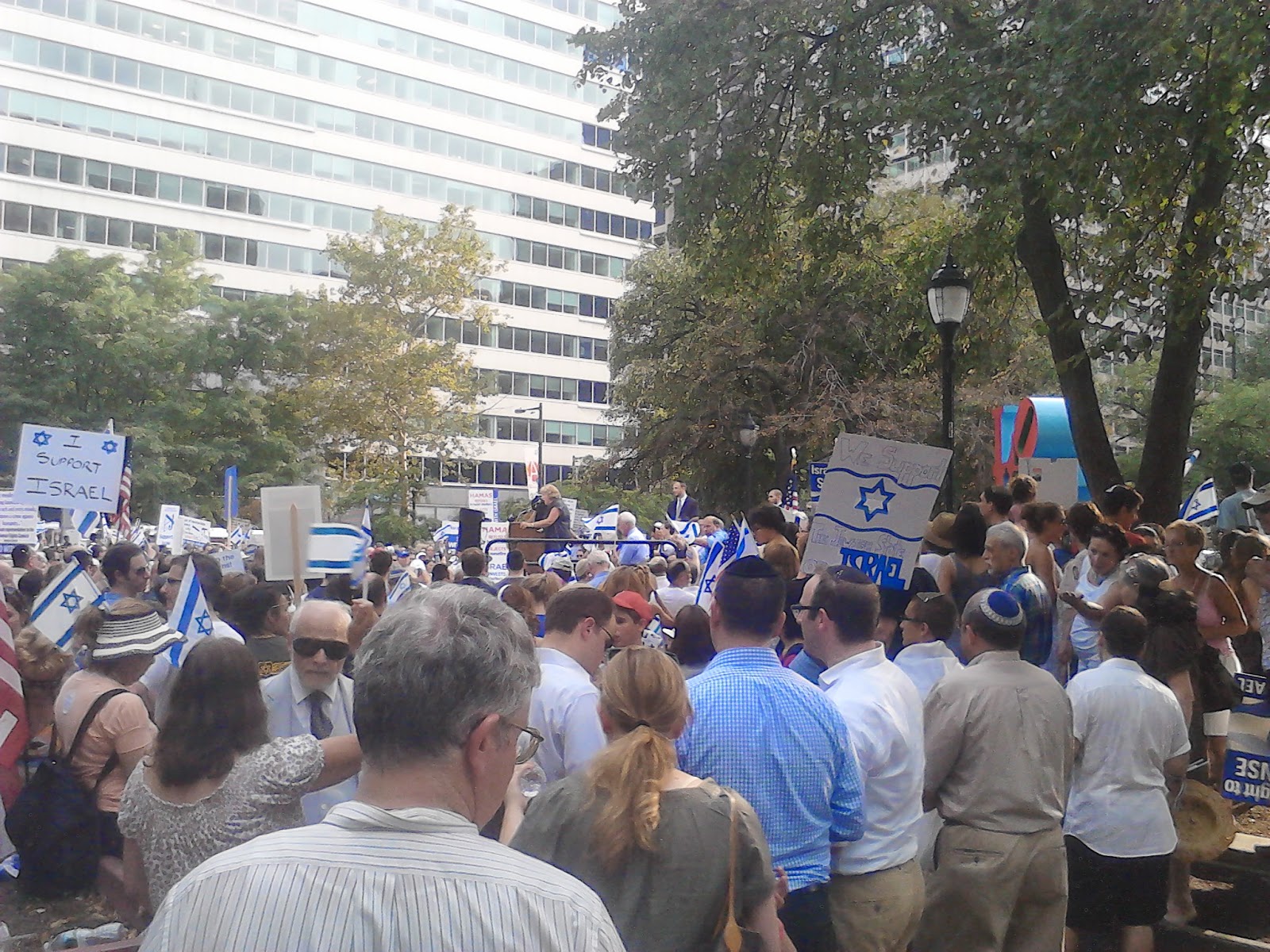 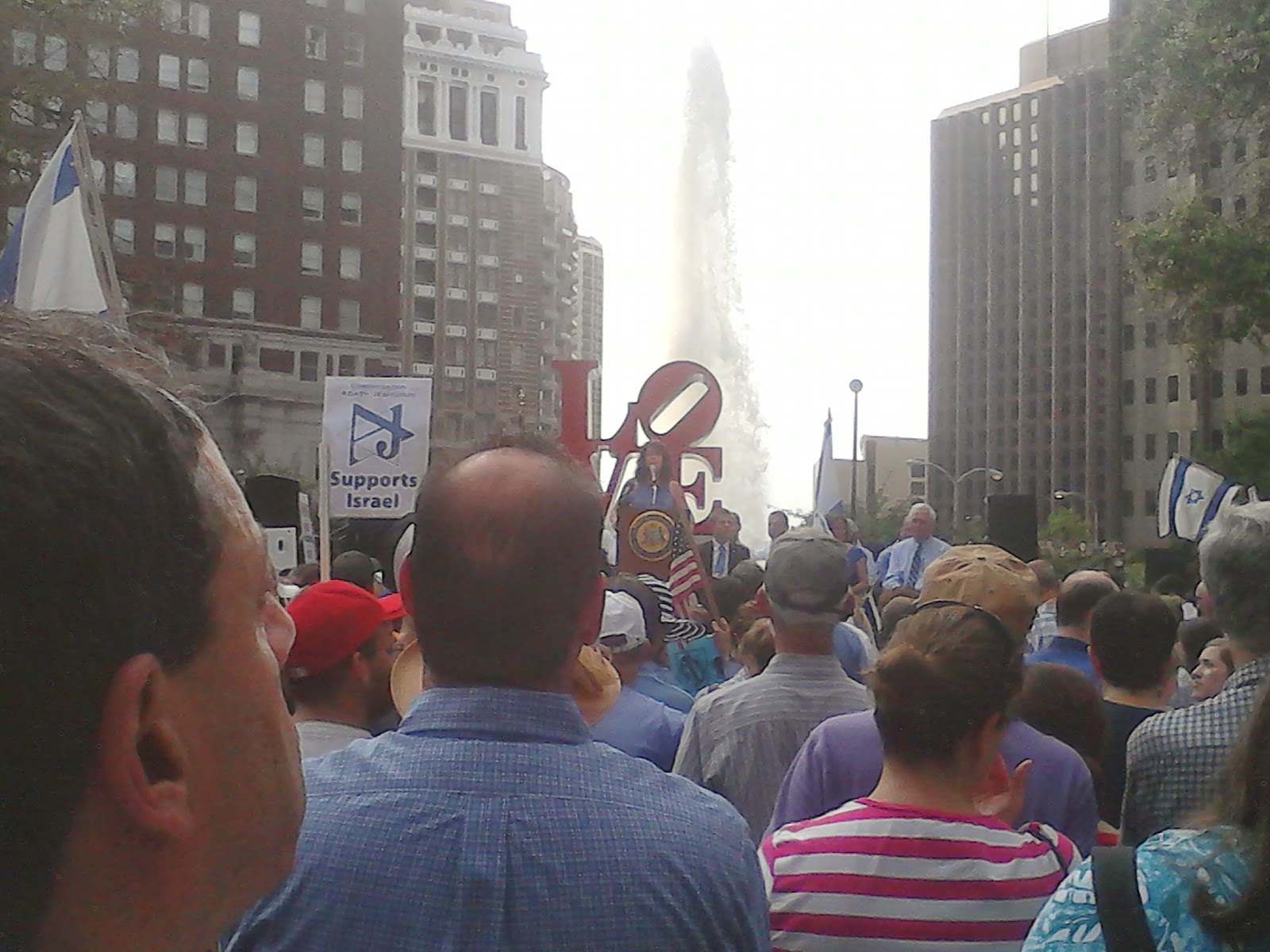 We had one 'daring infiltrator' (I'll bet he feels so radical right now!) from the other side make it into ours - a blonde, twenty-something-year-old Zack Morris from Saved by the Bell lookalike, wrapped in a keffiyeh, screaming profanities and extending us an offering of both (both!) middle fingers, as he was dragged out of our crowd by half a dozen Philadelphia police officers in under fifteen seconds, to laughter and polite applause from us. 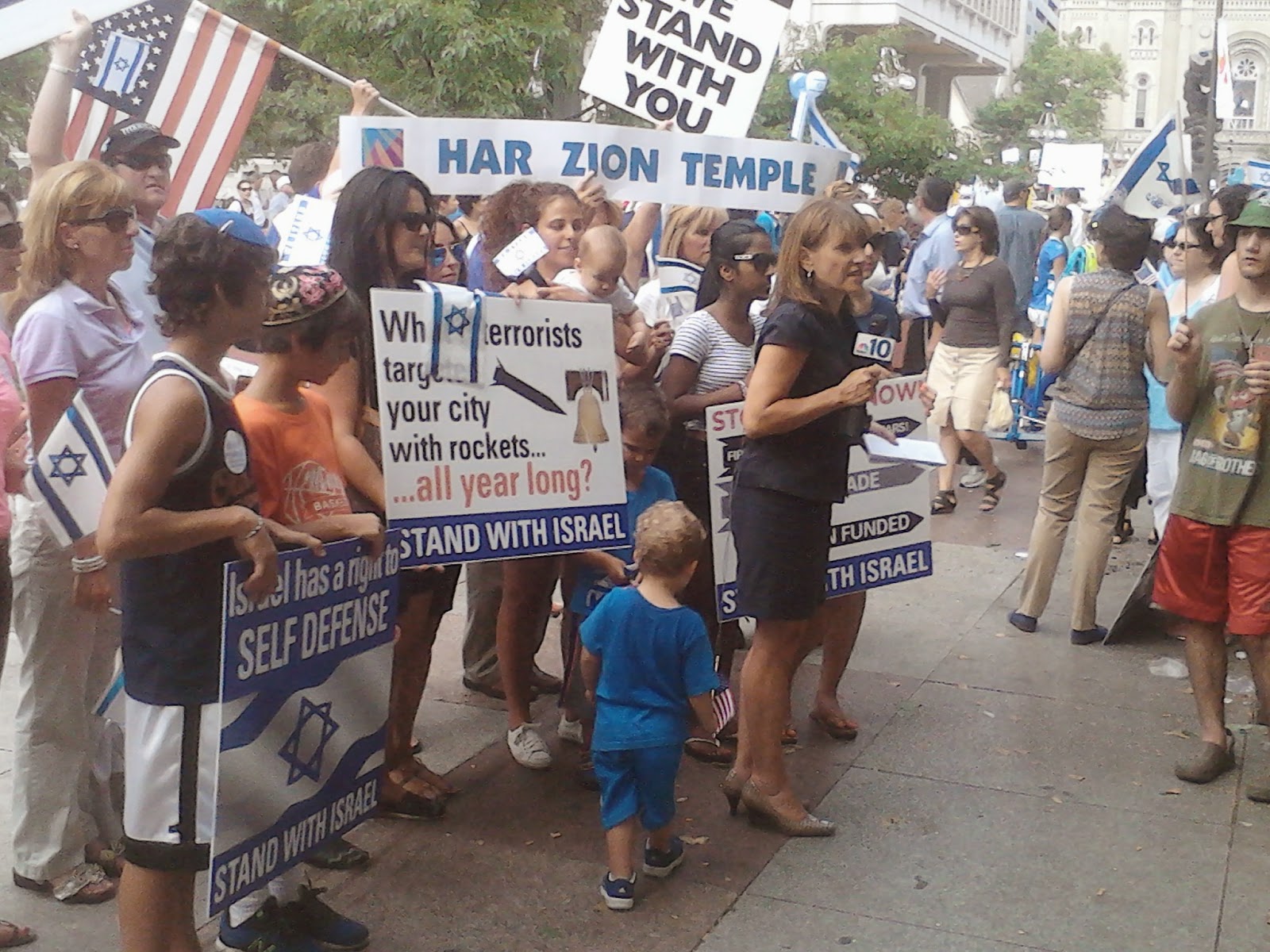 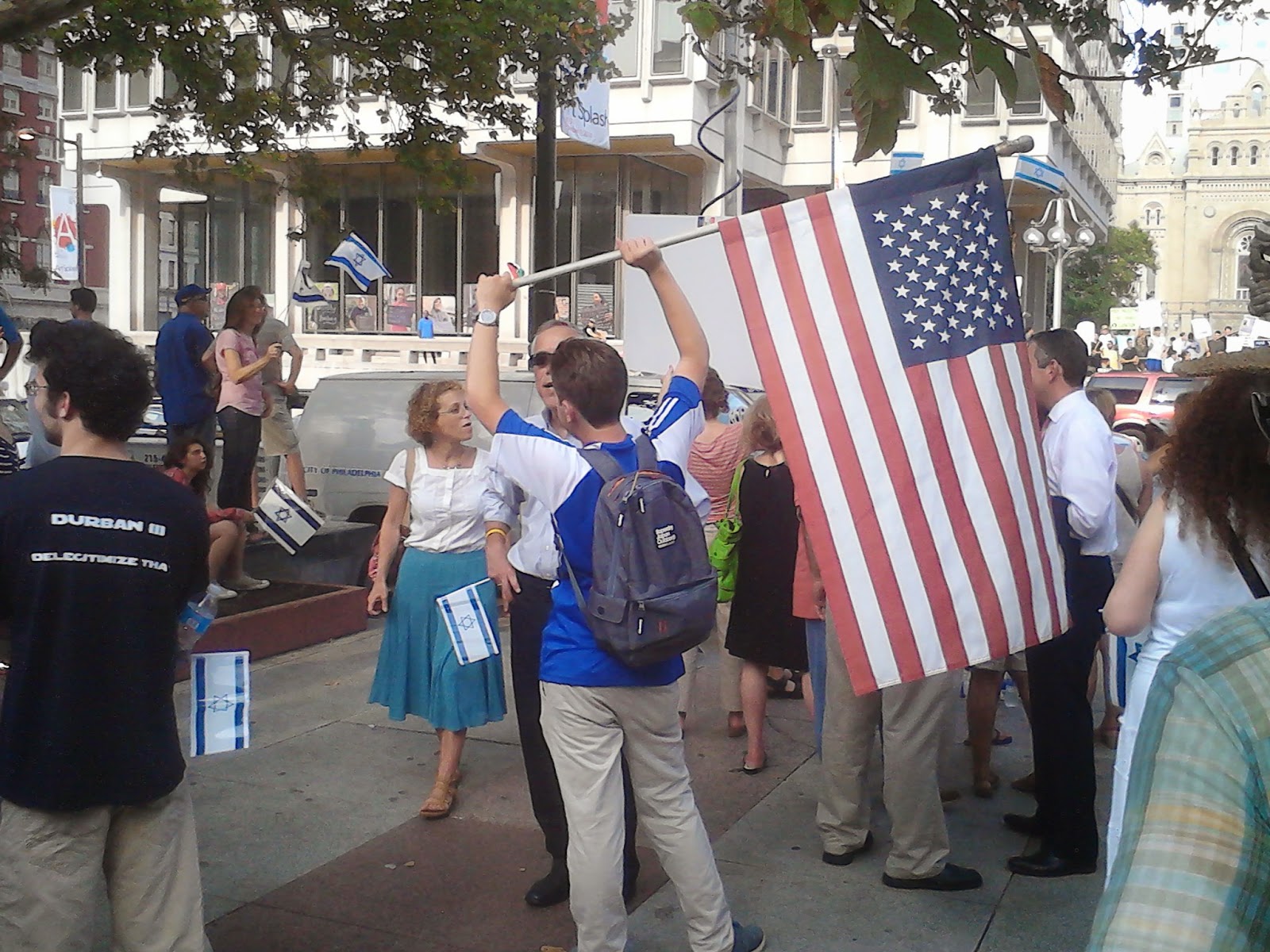 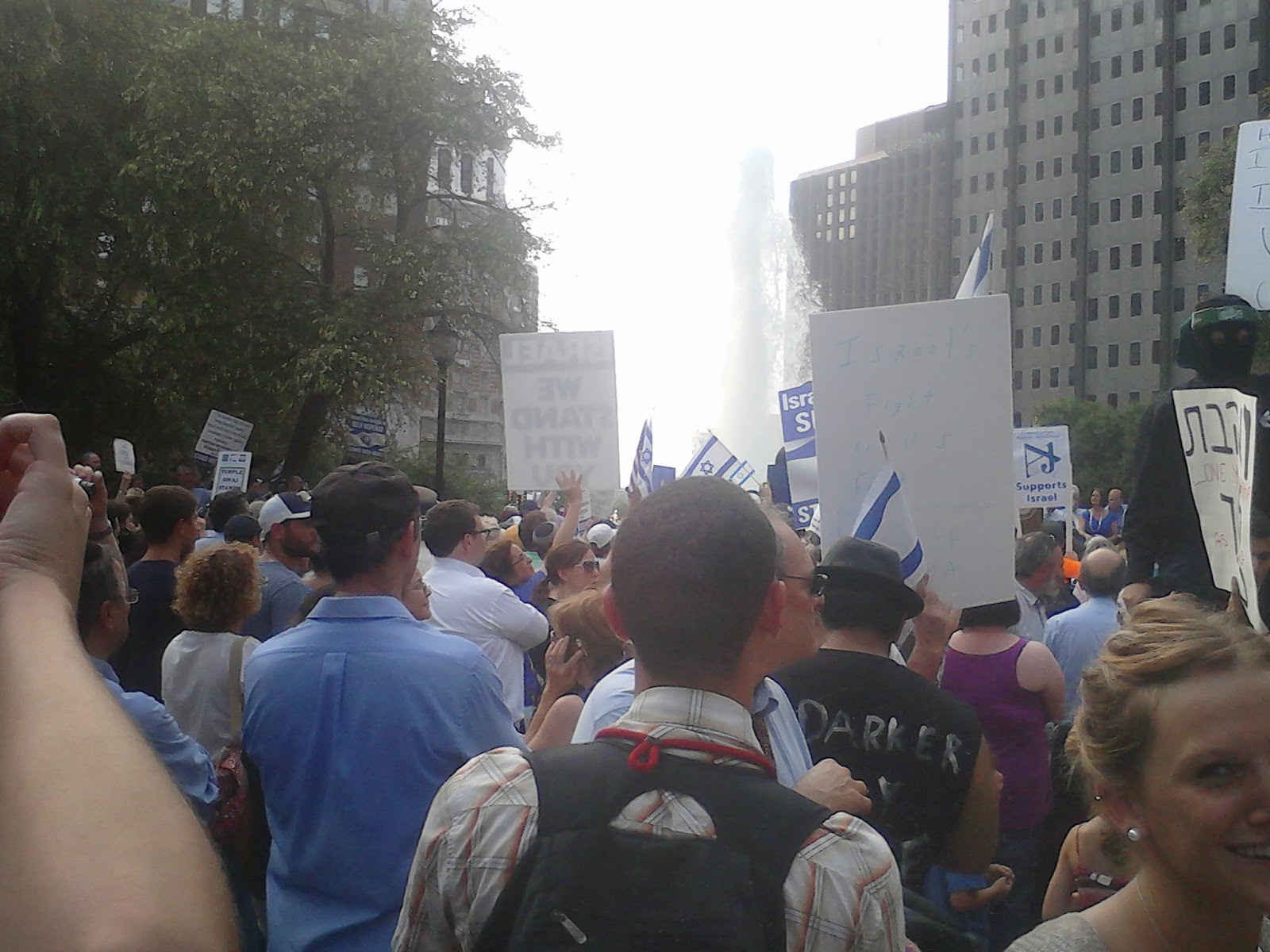 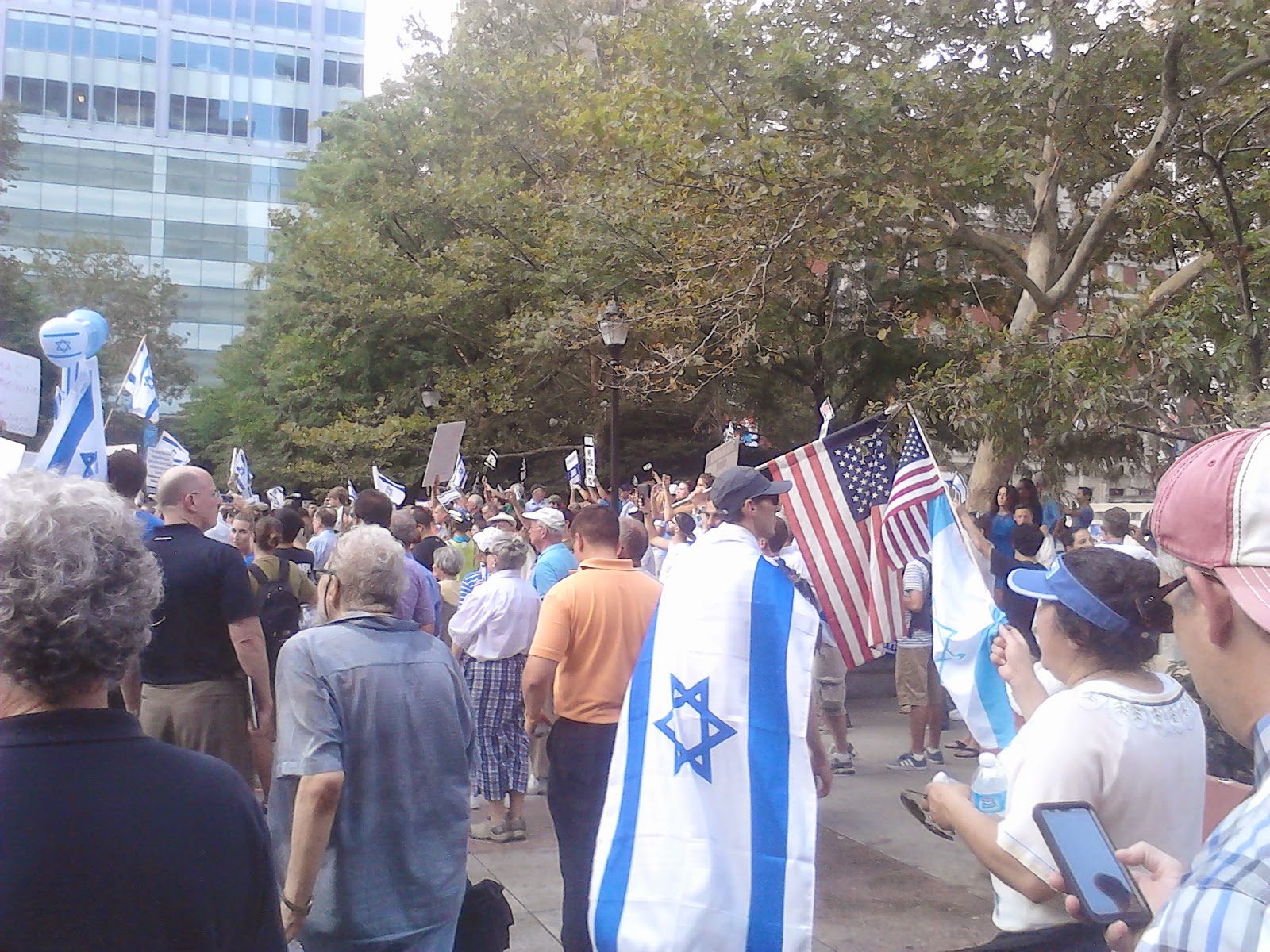 There was also a gentleman dressed up in full Hamas regalia, mask and all, with a "Hi, my name is... Hamas!" name tag and a great sign. 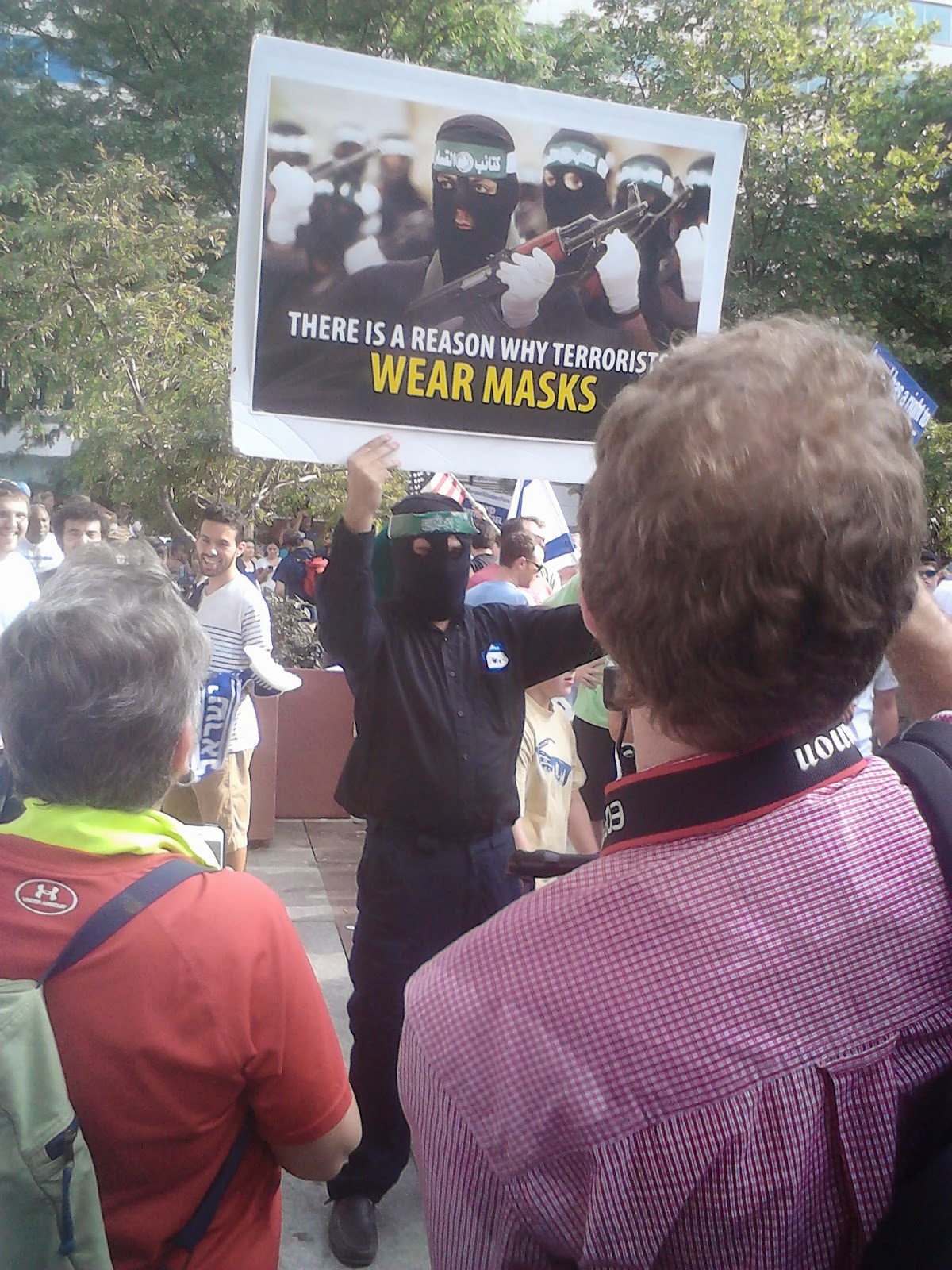 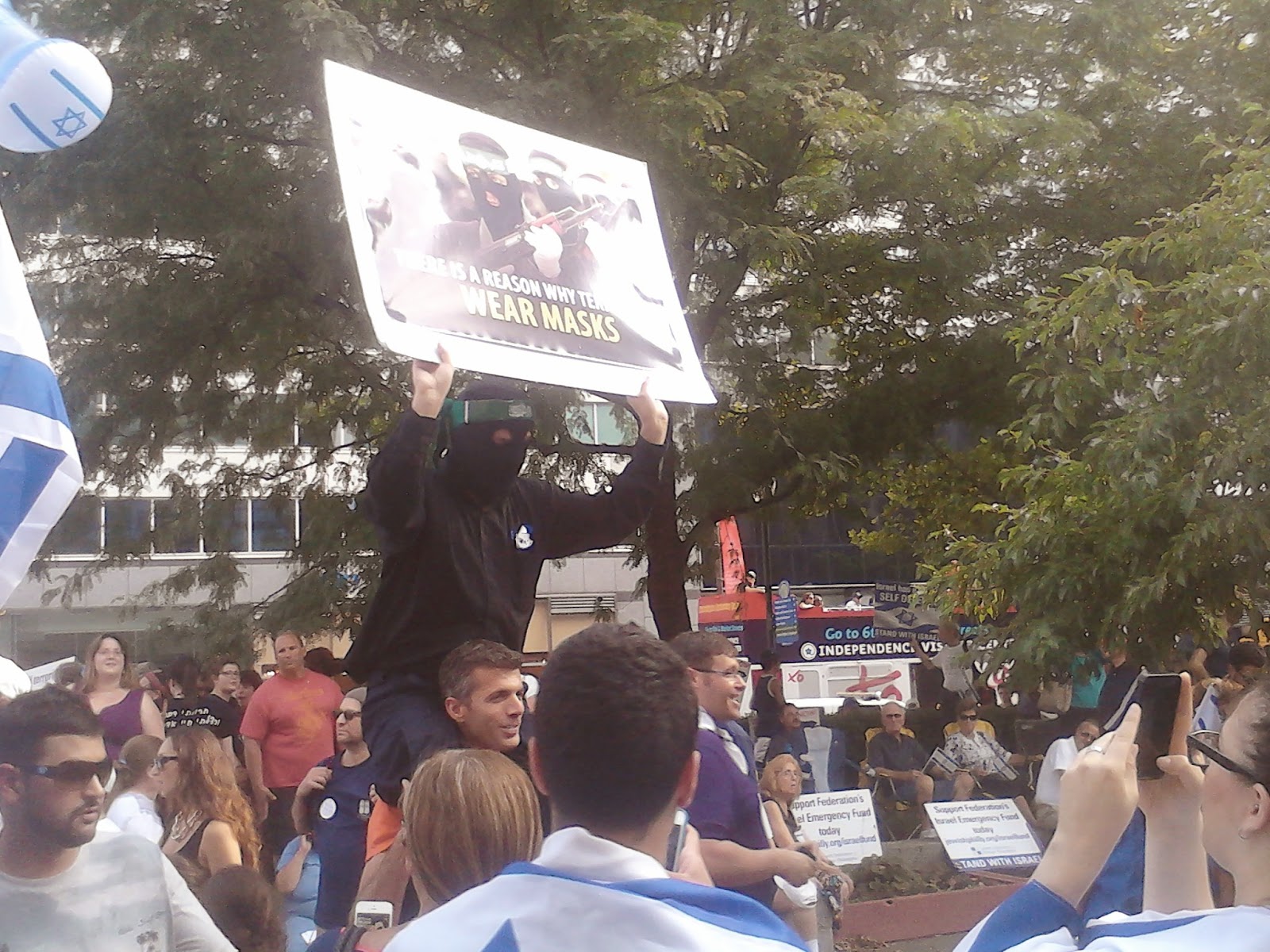 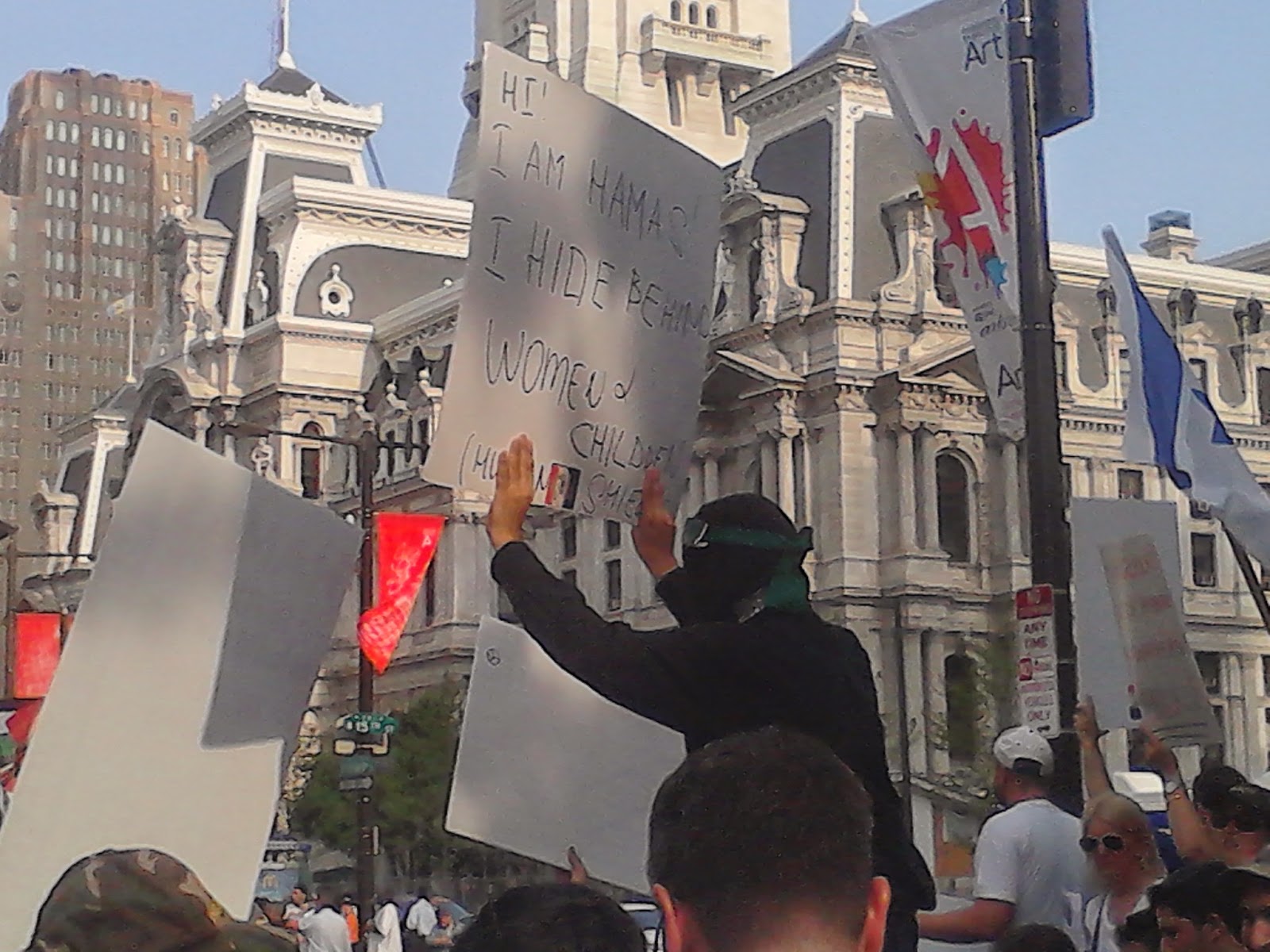 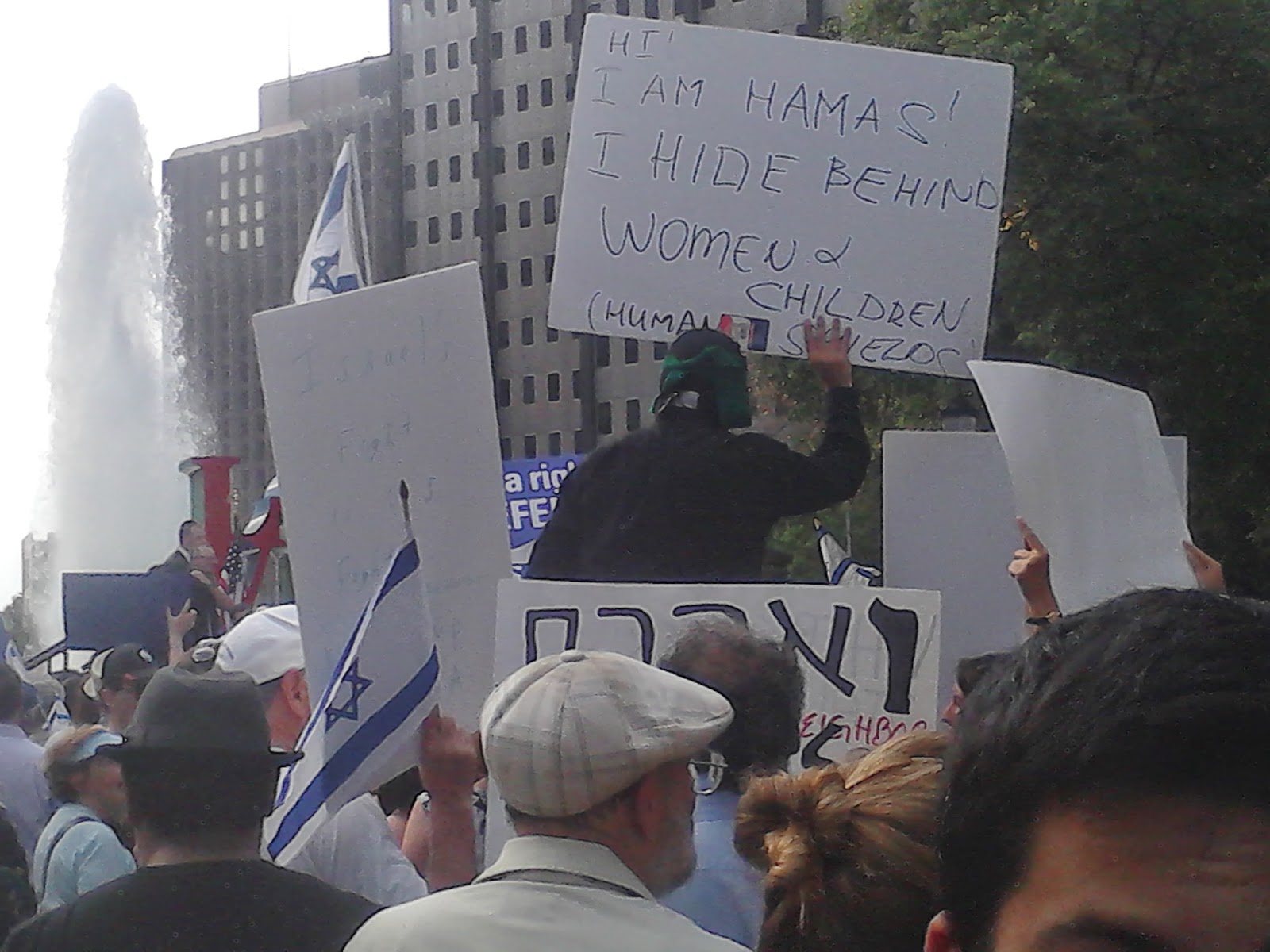 He was also charged at by police who tried to remove him, until he and a few friends in the crowd explained what he was doing, and after a frisk and having to remove his mask briefly, he was allowed to carry on and do his thing, at which point he became sort of a mascot of ours, even being lifted up on shoulders at times, the better so that his message could be sent across the street, and to the tour buses passing through. 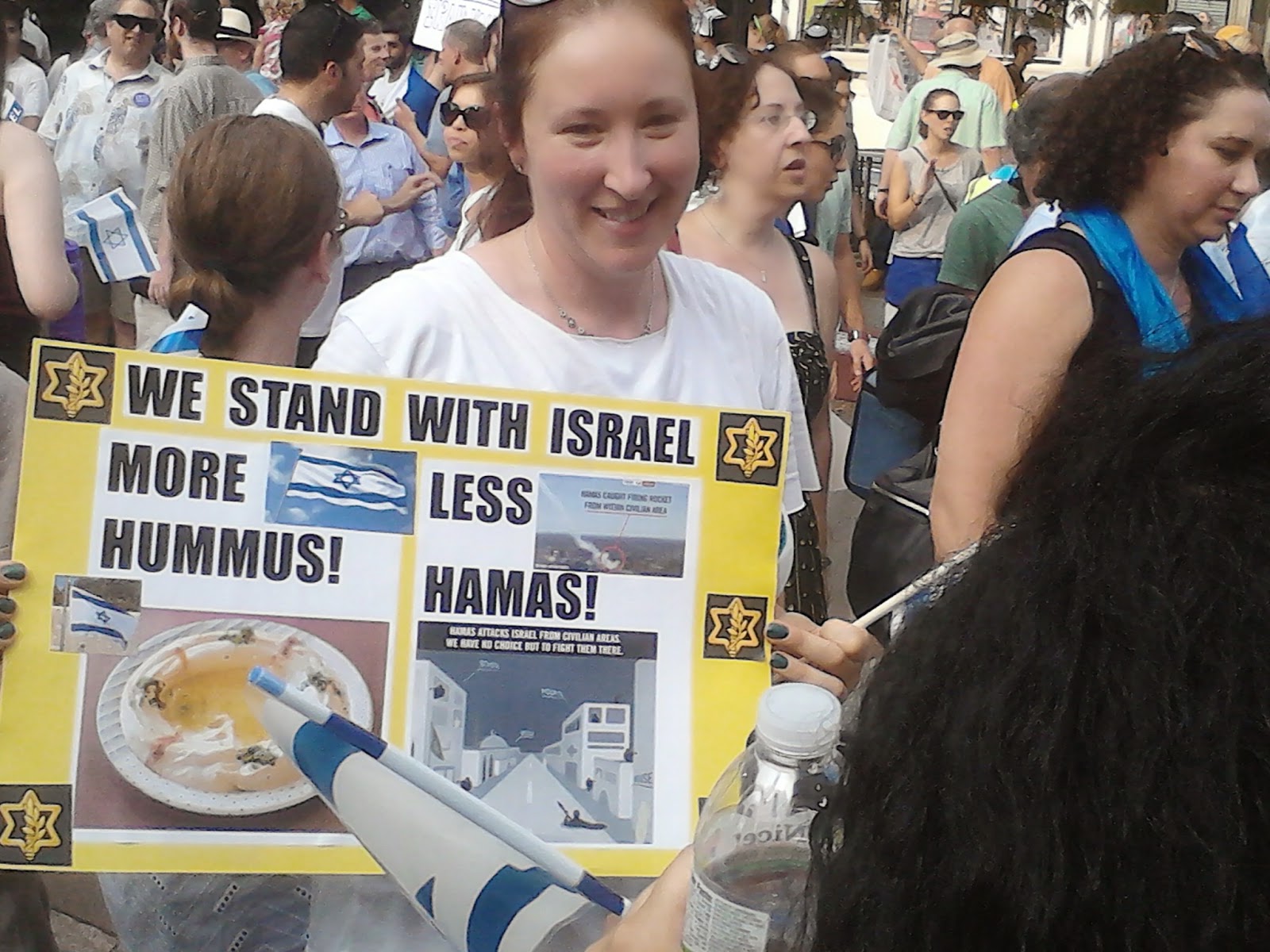 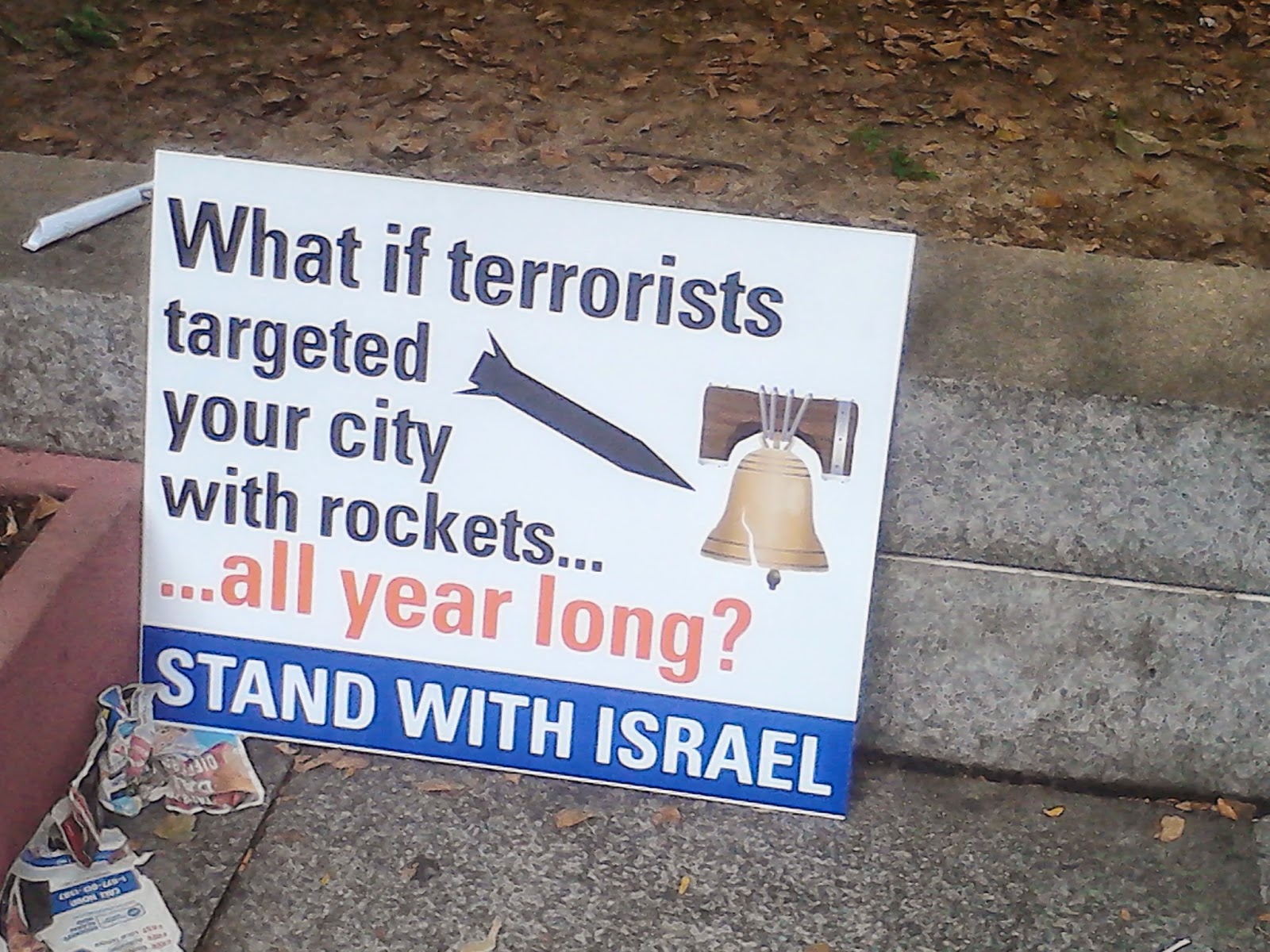 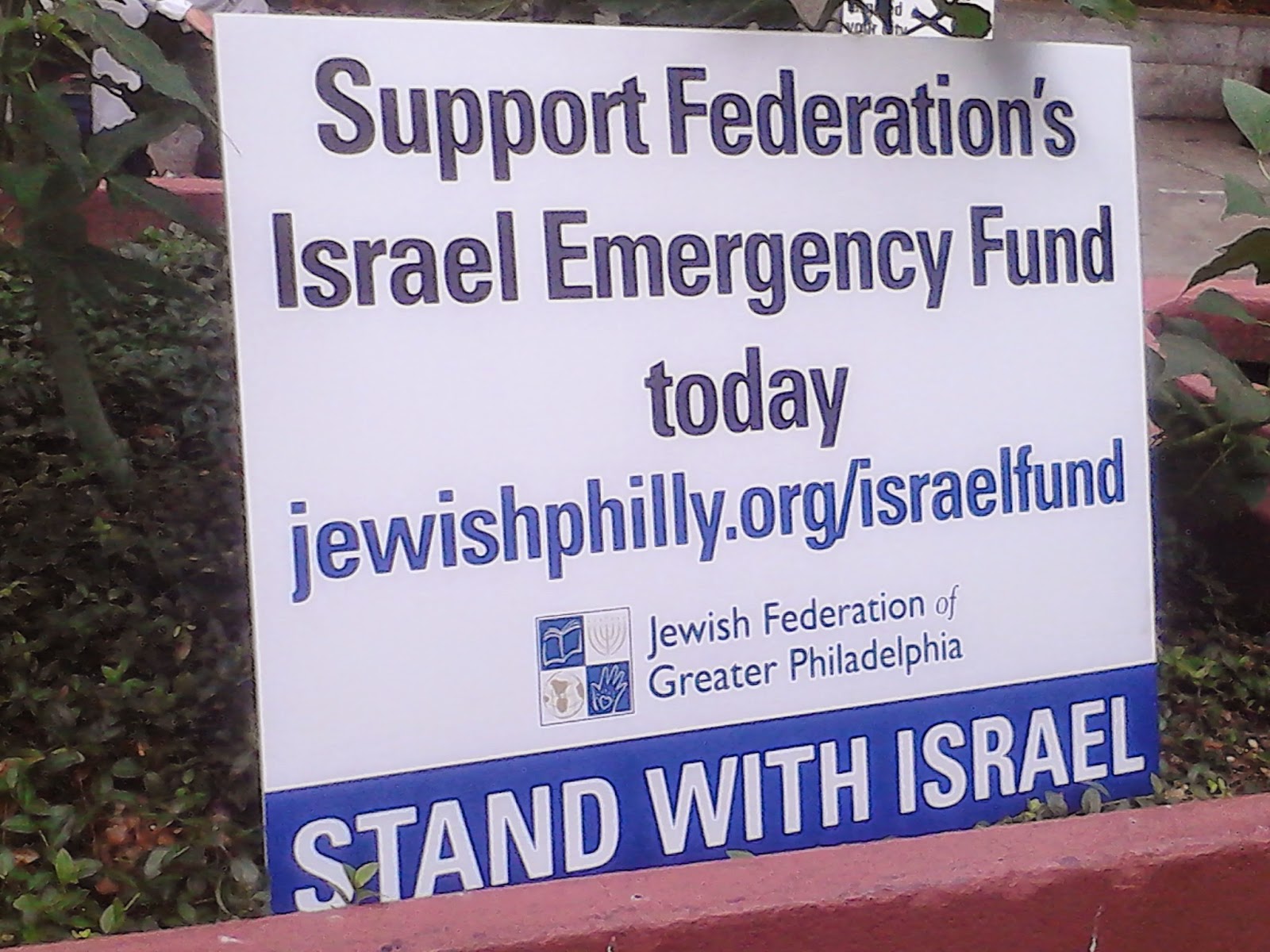 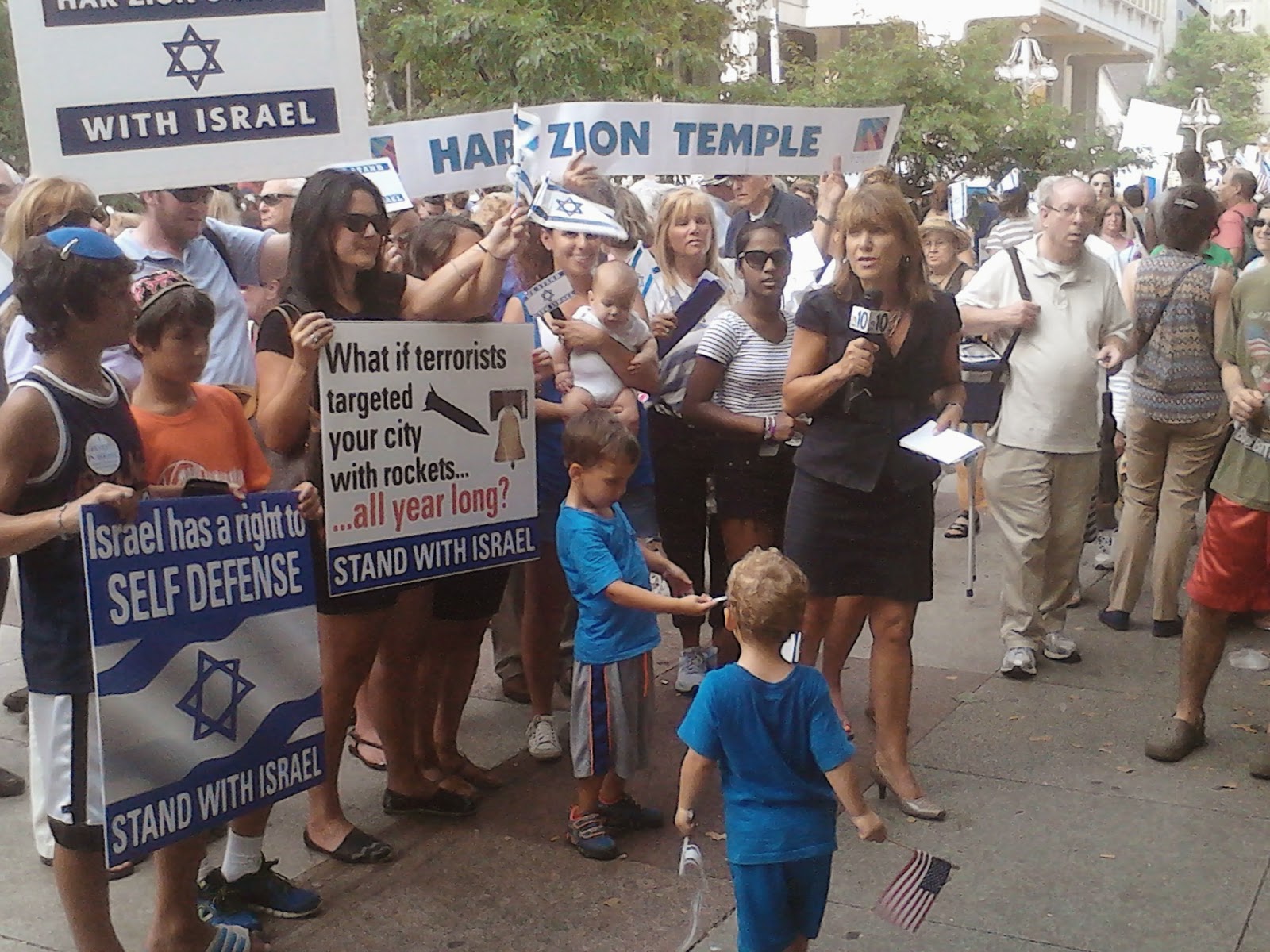 Ah, those tour buses.  We received more than a few passing signs of approval from tourists on the upper decks of the double-decker Philadelphia sightseeing buses.  Ours was a huge rally of hope, unity and of course more than a few occasions of comedy.  And yesterday, we Philadelphia pro-Israel folks definitely won the day.  Big time. 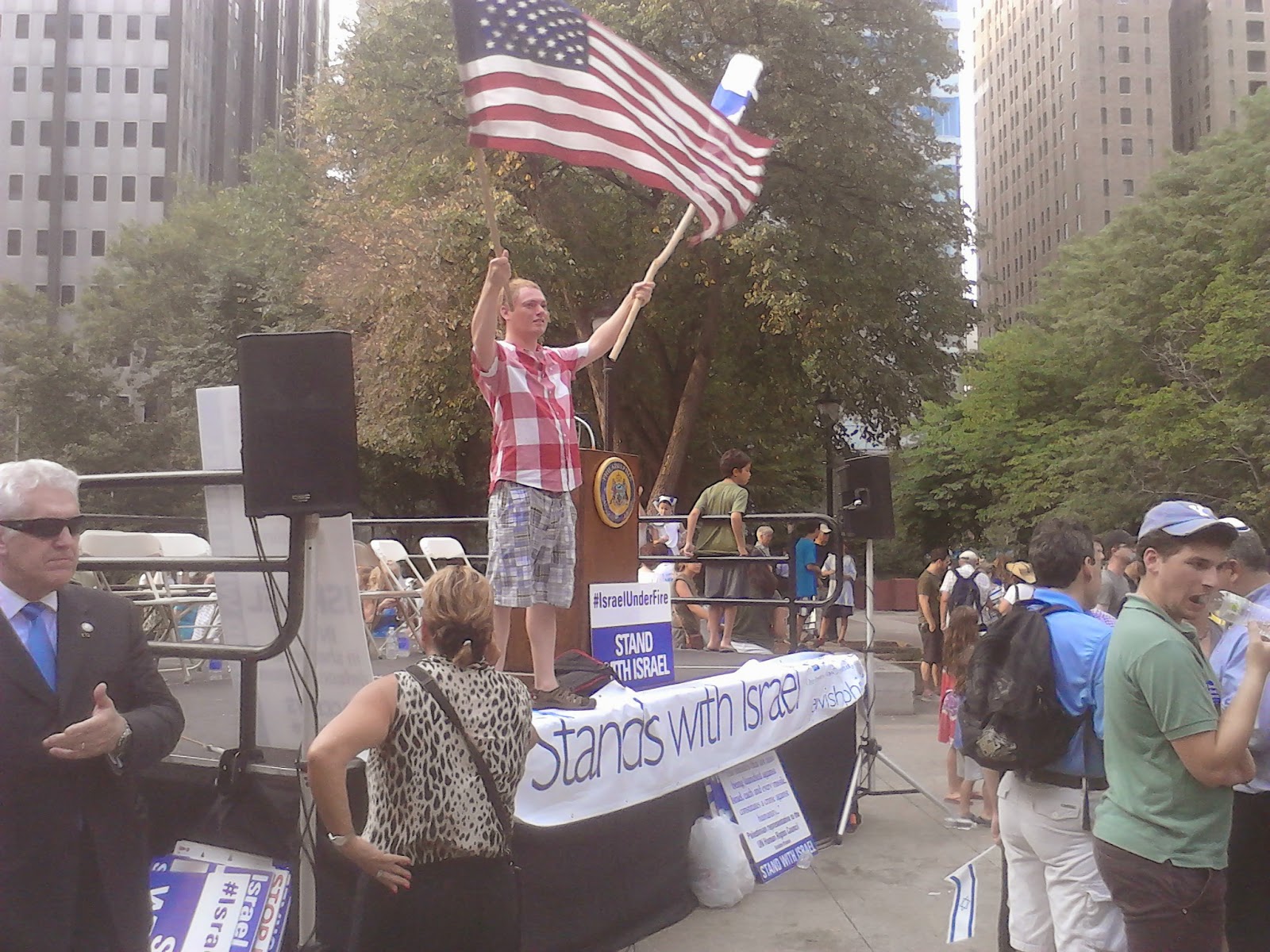 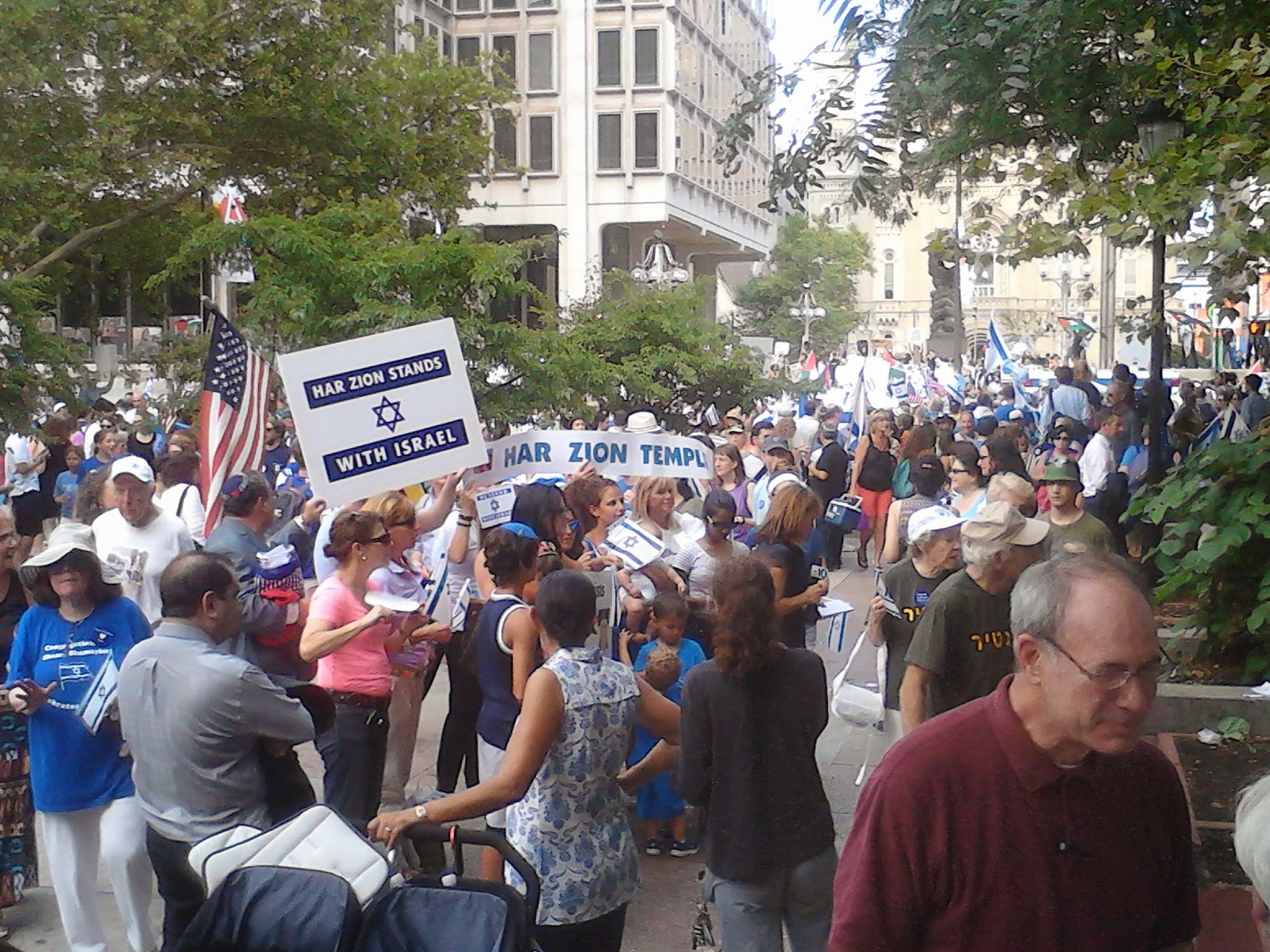 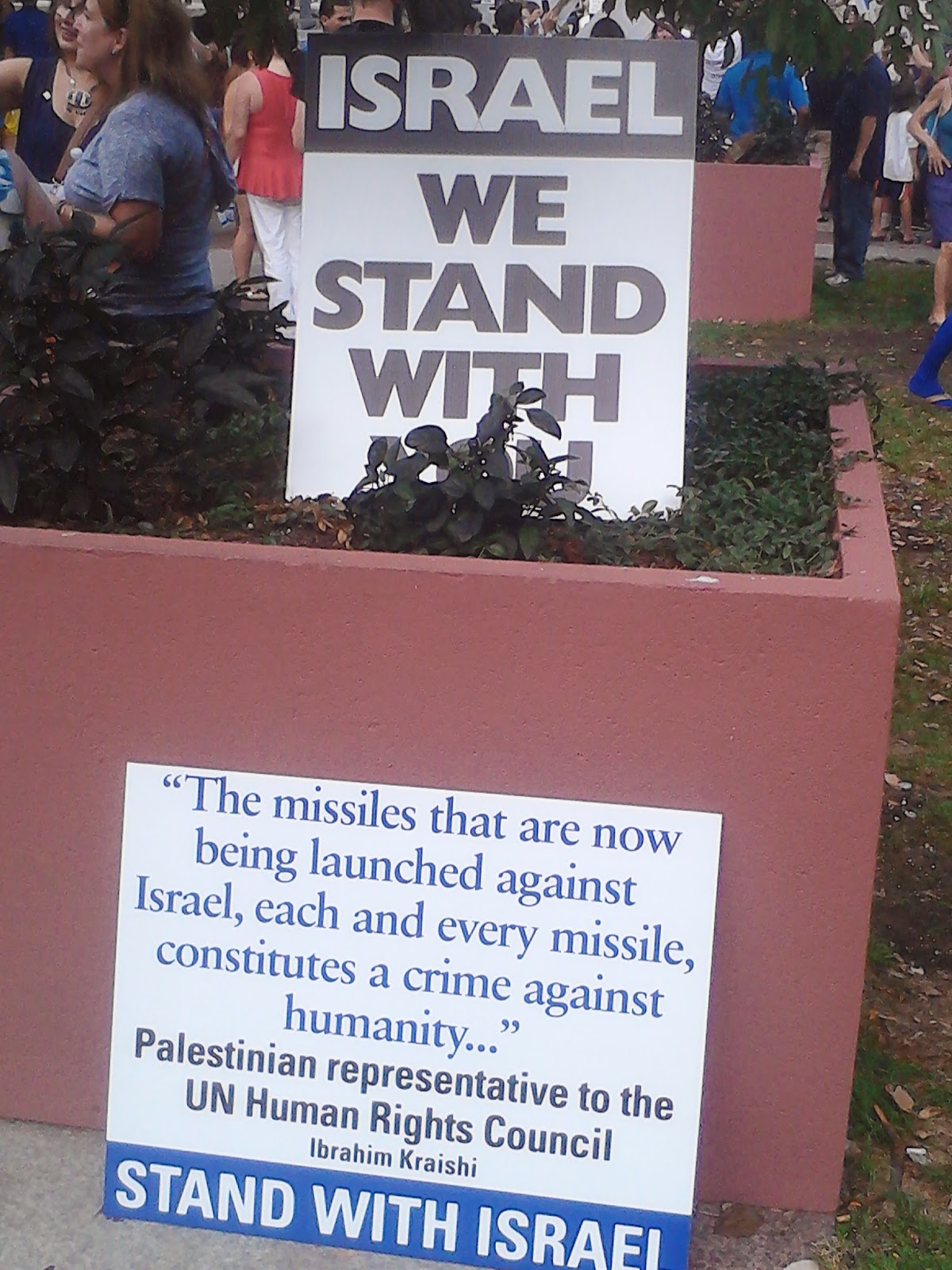 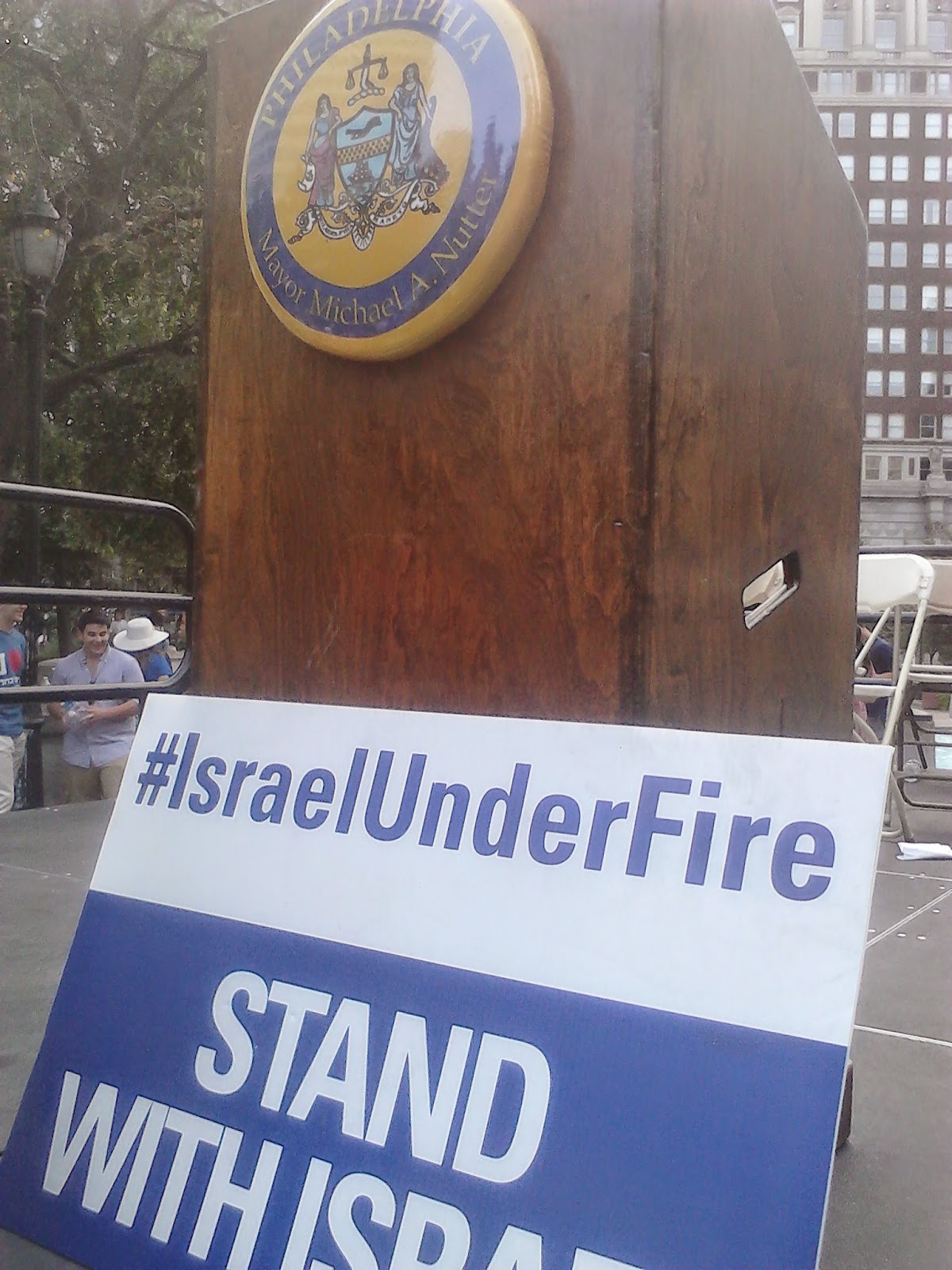 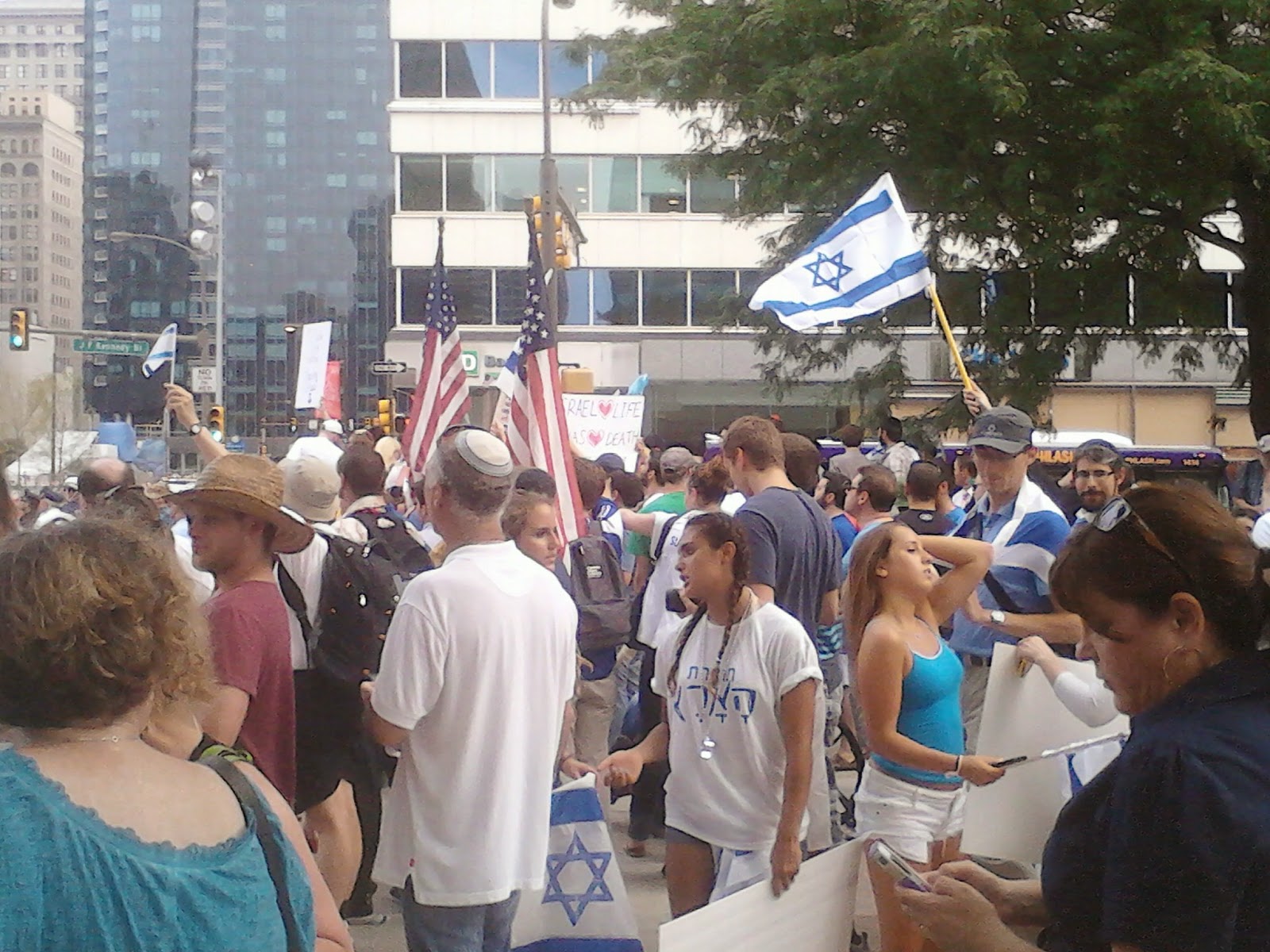 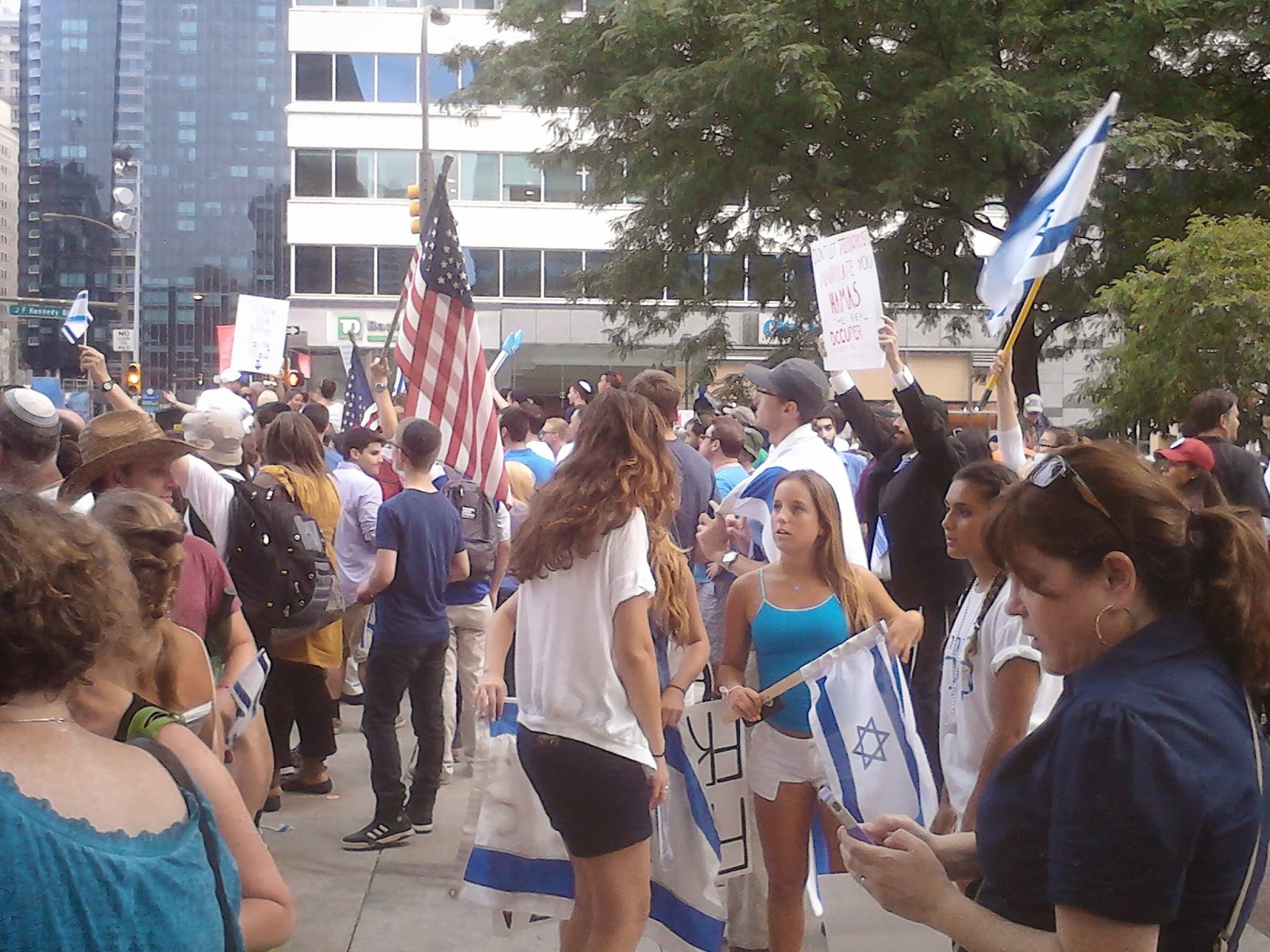 Posted by JayinPhiladelphia at 11:05 AM